For novice traders, FOMO can be a heavy burden to bear. Resisting the urge to buy Bitcoin (BTC) after a nearly 15% rally, which saw the price break both the $12K and $13K levels in less than 24 hours, is almost impossible.

Professional traders are more experienced and know precisely how to play these FOMO-inducing situations. As data has shown, they were mostly adding shorts up to October 20, right before the $12K rupture.

Most investors fail to grasp that being a pro trader does not mean all the emerging trends are played profitably. Instead, surviving when things go wrong is the true mark of success.

As BTC rocketed to $13,217, a total of $350 million worth of liquidations occurred, and the futures contract funding rate shows there was not excessive short leverage.

Perpetual contracts, also known as inverse swaps, have an embed rate usually charged every eight hours. When shorts are the ones demanding more leverage, the funding rate goes negative. Therefore, those shorts will be the ones paying up the fees. 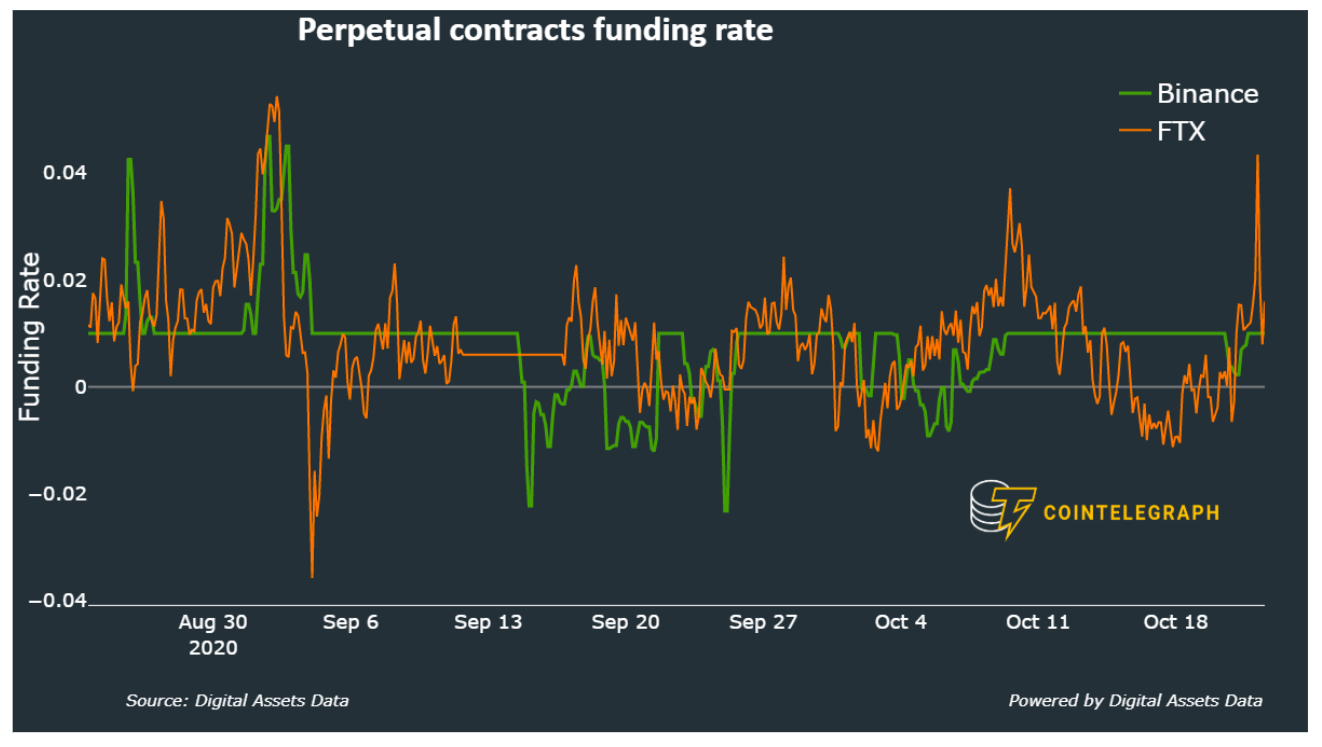 The above chart shows that such a situation hasn’t occurred over the past few weeks, at least not in a significant way. Thus, despite selling ahead of the price surge, top traders were not squeezed out of leveraged short positions.

Data show pro traders covered their shorts on Oct. 21 and they remain distanced from placing bullish bets. This action is supported both by crypto exchanges top traders long-to-short ratio and the futures contracts premium.

Pro traders covered shorts but are unwilling to go long

According to Huobi’s long-to-short ratio, there has been no sign of aggressive buying. Data indicates that top traders are not confident that the current rally is sustainable despite some short-covering activity. 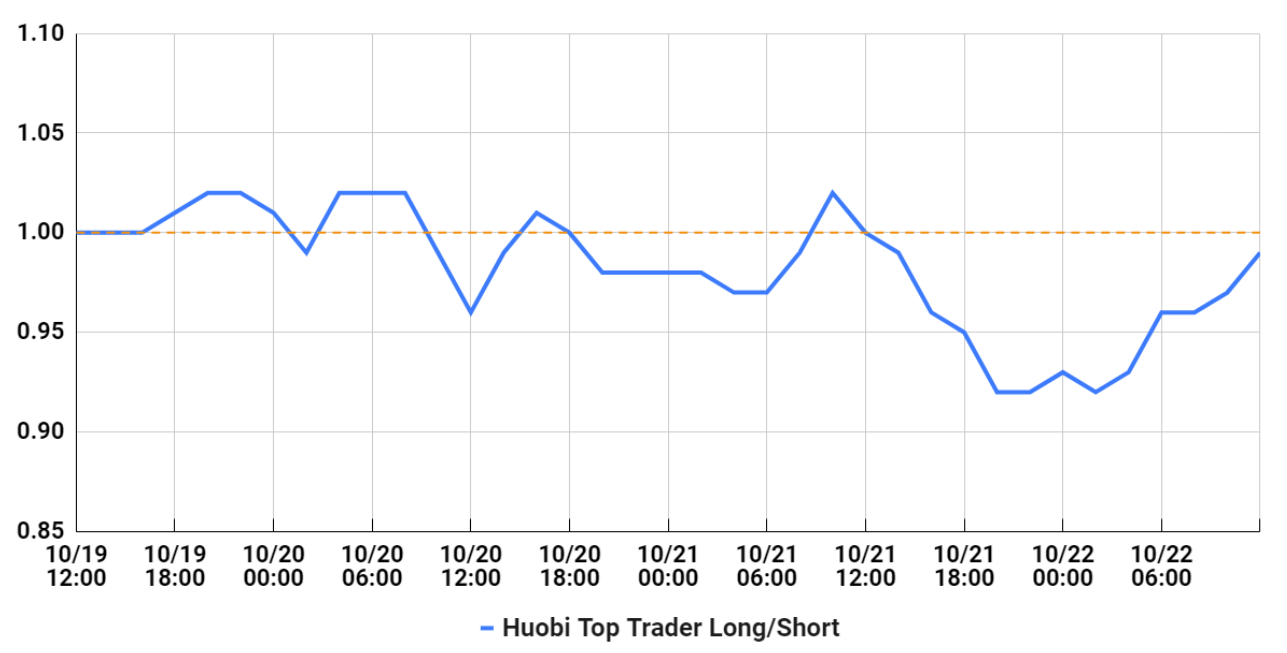 The long-to-short ratio had been relatively neutral until October 21. Suddenly, top traders decided to short as BTC broke the $12.5K resistance. This morning, as BTC refused to lose ground, those traders started to cover their shorts.

Still, at the moment, there are no signs of bullish bets as Huobi’s latest data favoring longs by 10% occurred over two weeks ago. 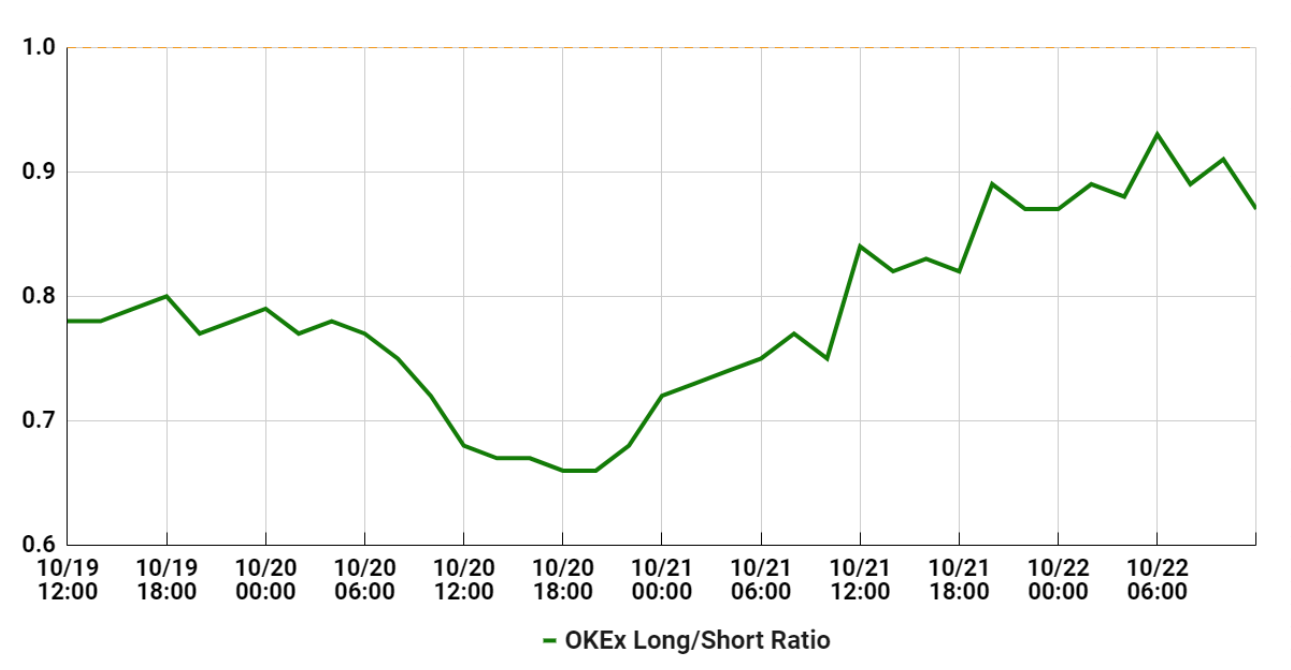 As for OKEx top traders, a similar pattern emerged, although the shorting movement happened ahead of $12K. This indicator remains in favor of shorts, a trend that emerged in mid-September and has been held since then.

To confirm whether there has been a change in sentiment, one should monitor the futures contracts premium. Those contracts usually trade with a slight premium on healthy markets across any asset class.

Bullish markets will cause futures contract sellers to demand a higher price to postpone settlement instead of making the sale at regular spot markets. If the current $13K level has managed to restore bullish momentum, this should be reflected in this indicator. 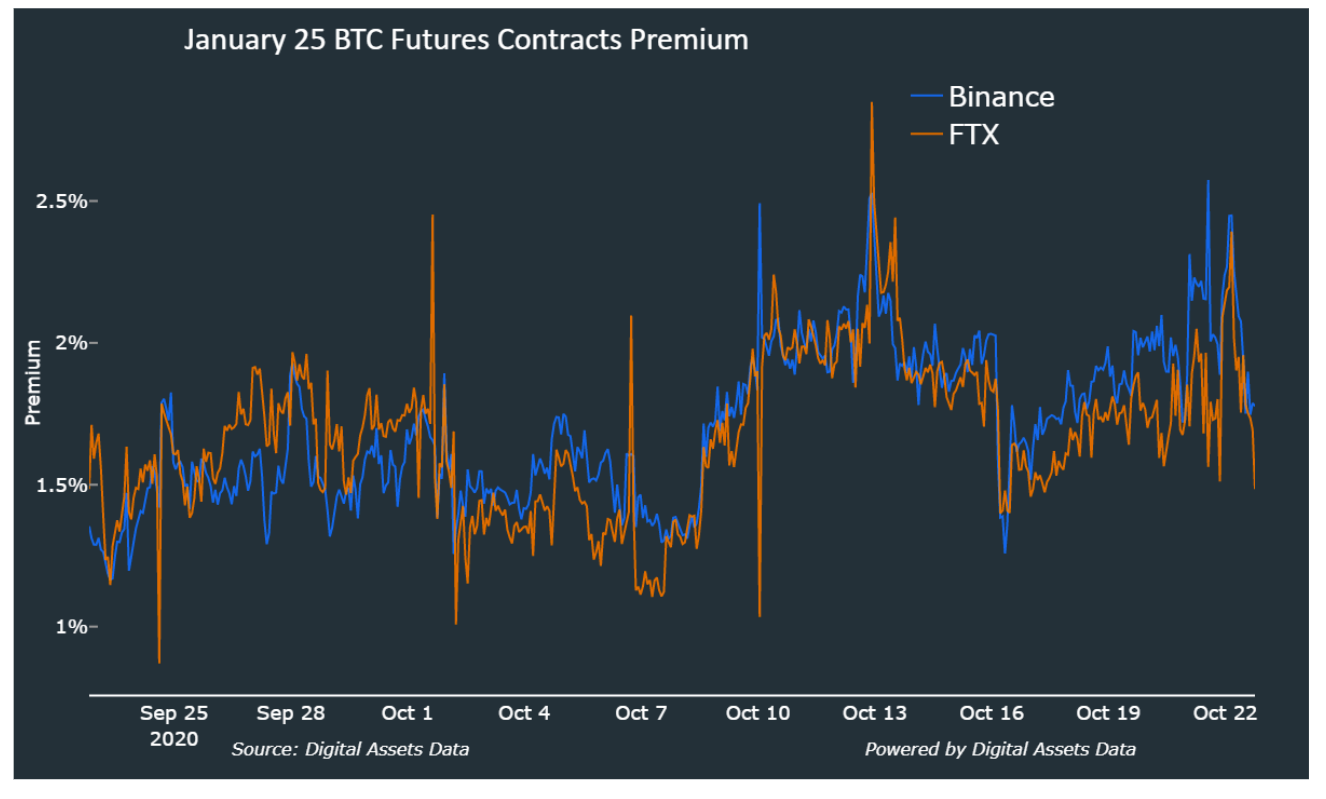 As Cointelegraph and Digital Assets Data show, the current 1.8% premium matches the same level seen three weeks ago as BTC hovered around $11.5K. This data is further evidence that top traders are not confident in buying BTC despite the 13% price increase since then.

Implied volatility is the primary metric that can be extracted from options pricing. Whenever traders perceive an increased risk of larger price oscillations, the indicator will shift higher. The opposite occurs during periods when the price is flat or the expectation of mild price swings. 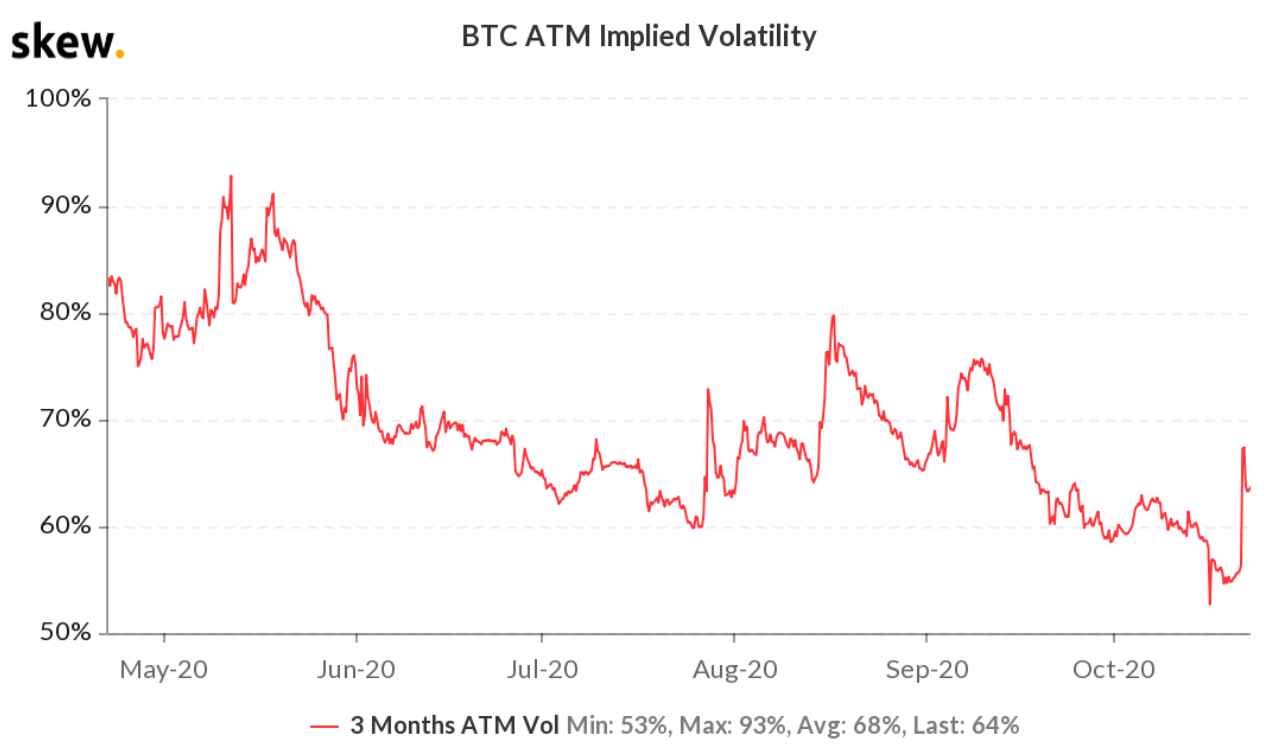 Bitcoin’s implied volatility had been in a downtrend during the past six weeks, but yesterday’s move seems to have surprised options traders. Not only did the indicator spike from 55% to 70%, the volume traded on options contracts ($575 million) was three times higher than average.

The sudden volatility spike and the consequent partial retrace to the current 64% level indicate that some traders were ill-positioned and had to close their positions abruptly.

According to the Black-Scholes model, a 15% implied volatility move causes a $14K December call option price to move 40%. This change shows that events like yesterday’s are sensitive to leveraged traders, as any leverage above 3x would have been liquidated.

Going by the long-to-short ratio and futures contracts premium, there is hardly any relevant buying activity from top traders. This lack of interest raises a yellow flag as on-chain data shows that as the Bitcoin price surged above $13,000, a record-high 22% of the total BTC supply was transacted.

This movement could be a potential signal of large entities preparing to sell. Still, one must remember that unless those BTC are transferred to exchanges, over-the-counter (OTC) deals tend to have less price impact.

The views and opinions expressed here are solely those of the author and do not necessarily reflect the views of Cointelegraph. Every investment and trading move involves risk. You should conduct your own research when making a decision.