Cointelegraph takes five factors that could help decide whether this week is bullish or bearish for BTC price action.

U.S. election could send dollar back to 2018

The outcome of a Democratic win looks bleak for one macro indicator in particular: the U.S. dollar currency index (DXY), analysts say.

In a report on Oct. 12 quoted by Bloomberg, Goldman Sachs warned that Joe Biden entering the White House could spook markets in advance, driving DXY down to its lows from 2018.

Bitcoin has historically seen strong inverse correlation with DXY, and fresh lows could thus be a boon for hodlers. In August, $12,500 highs for BTC/USD came in tandem with DXY dipping to just above 92 points. 2018 saw a dive to 89 — 4% lower than at present.

In addition, the roll-out of a coronavirus vaccine would serve to hinder, rather than help dollar strength.

“The risks are skewed toward dollar weakness, and we see relatively low odds of the most dollar-positive outcome — a win by Mr. Trump combined with a meaningful vaccine delay,” Goldman strategists wrote.

“A ‘blue wave’ U.S. election and favorable news on the vaccine timeline could return the trade-weighted dollar and DXY index to their 2018 lows.”

Last week, Cointelegraph reported an opinion that, regardless of who wins in November, safe havens will win thanks to the election result, with one analyst eyeing a $4,000 price target for gold.

Regarding the coronavirus, fresh restrictions coming in across Europe are set to produce more economic concerns.

Amid the turmoil, last-minute Brexit negotiations are adding to the headache for the United Kingdom, with a deadline for reaching some form of consensus on exiting the European Union now just days away.

In the U.S., politicians have still failed to agree on a new stimulus package, which Americans are eagerly anticipating after Treasury Secretary Steven Mnuchin confirmed the issuance of a second $1,200 stimulus check.

Despite the gloom, stocks are up, with S&P 500 futures gaining 0.25% prior to the open on Monday. Leading the way is China, where a weakening yuan and investors hopeful that an upcoming speech from president Xi Jinping will serve to entice more foreign investment. 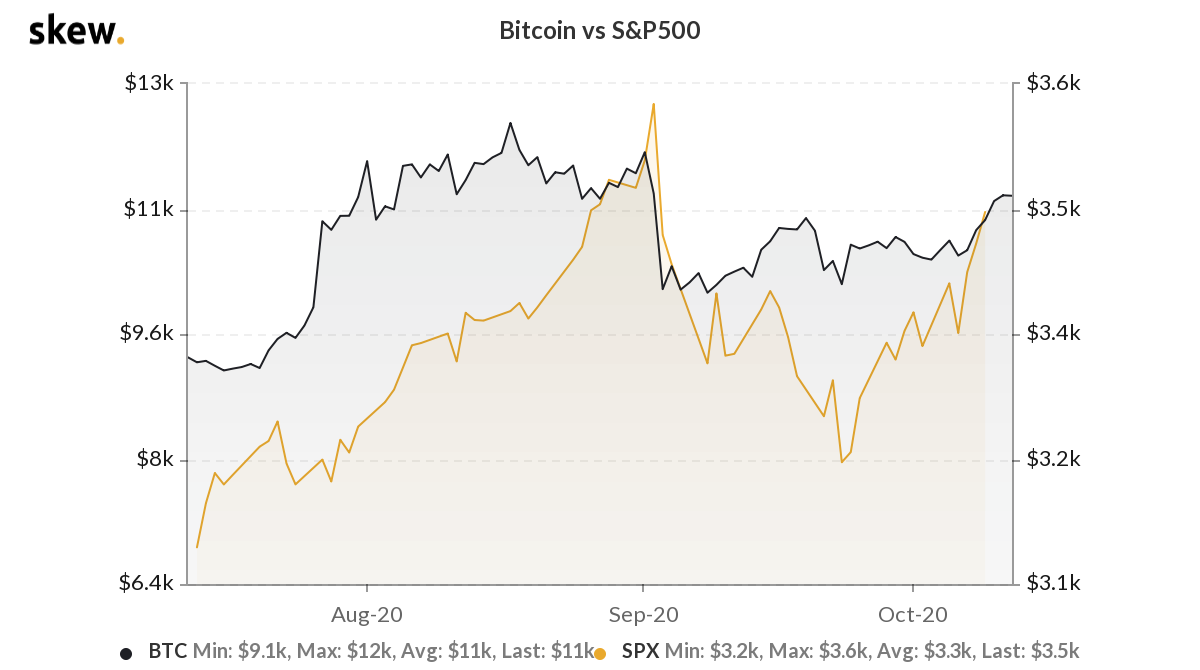 Not so gloomy are Bitcoin’s network fundamentals this week. Depending on the metric used, hash rate hit new all-time highs over the weekend, suggesting that more computing power than ever is being dedicated to mining.

According to data from monitoring resources Bitinfocharts and Blockchain, hash rate hit 155 exahashes per second (EH/s). 130 EH/s marked a tenfold increase versus when BTC/USD hit its record highs of $20,000 in December 2017.

Hash rate is difficult to measure precisely, and different tools produce different results, but the trajectory is clear: Bitcoin miners are bullish.

As Cointelegraph often reports, a popular theory suggests that highs in hash rate and jumps in network difficulty tend to produce Bitcoin price rises later on.

“The correct hashrate-adjusted price for #Bitcoin right now is approx. $32,000 per coin,” Max Keiser, one of the theory’s main proponents, commented last week.

“Once we get through this 2018 supply overhang and legacy exchange wash-trading supply glut we’ll see new ATH.”

Difficulty has yet to show signs that it will follow hash rate to new records in the short term — estimates on Monday showed that the next readjustment will be neither up nor down, just like the last. 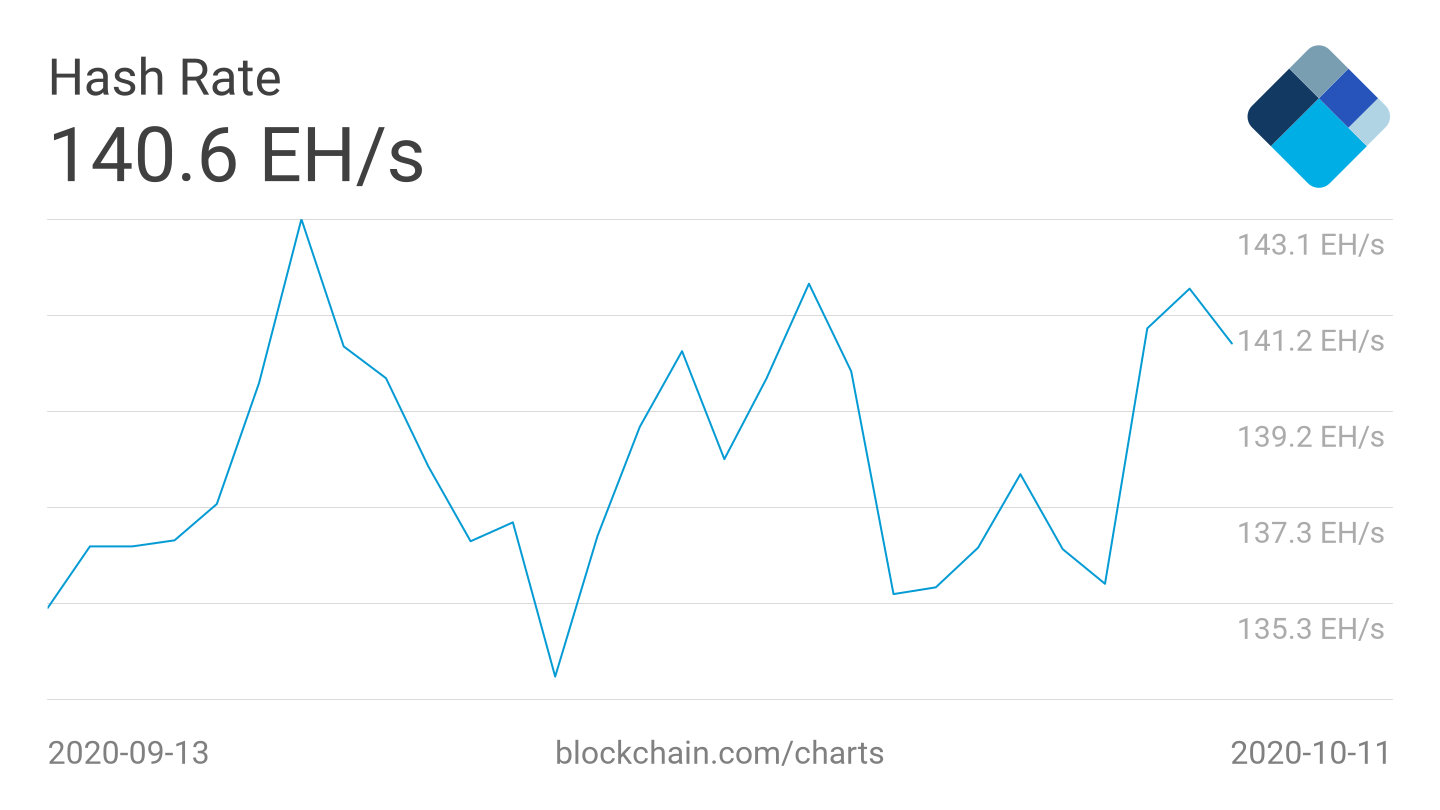 Investor sentiment is slowly firming up when it comes to Bitcoin, according to the Crypto Fear & Greed Index.

Data from the market indicator shows that after August sparked warnings of overexuberance, a subsequent dip is now balancing.

On Monday, the Index was at 52, having passed the 50 mark for the first time since Sep. 21 over the weekend.

That puts investor sentiment in “neutral” territory — a relief compared to the “extreme greed” of August and the “fear” that followed.

The Index aims to show when a market sell-off is due, typically the closer its score gets to the top of its scale from zero to 100.

Volatility, market momentum and volume make up half of the weighted basket of factors which produce the score.

Lastly, despite few expecting its sudden push above $11,000, Bitcoin pundits are betting on further gains.

As noted by Cointelegraph Markets analysts among others, the area around $11,000 previously formed a key area to break, with $10,800 acting as a “pivot” point which could propel the market higher once reclaimed.

This came despite a mixed bag of news, which included the arrest of senior executives at derivatives giant BitMEX.

For some well-known names, the bullish mood is palpable.

“We’re going much higher. You have been warned,” researcher Vijay Boyapati tweeted on Sunday.